Want to get my all-in-one guide to creating old-fashioned homemaking routines?! Yes Please!

Get the recipe for this nostalgic, apple crisp pie; it comes together with just a few simple ingredients, it’ll be a family favorite!

Do you want a new FAVORITE, apple pie recipe?! I have one for you! This apple pie crisp is a delicious and easy pie recipe that your family will adore.

I love apple recipes and so does my husband. We’ve been lucky enough to have our own apple tree for the last five years. That being said, most years we get TONS of apples. We give a lot away, I usually can some, and a lot I save for apple pies.

I’ve tried quite a few different apple pie recipes over the years. All have been delicious. You really can’t go wrong with an apple pie;) BUT I have to say this apple crisp pie recipe is far-and-away my favorite.

I like to use my grandma’s tried-and-true pie crust recipe. Its a little difficult to work with if you’re not used to pie dough, but its totally worth the effort because its SO flaky and delicious.

This apple pie crisp filling is very simple with the perfect amount of spice. And finally, the crumb topping….. YUM. That’s all I have to say about that.

I hope you love it as much as we do!

What is the Difference Between Apple Pie & Apple Crisp?

An apple pie is just like a traditional pie, with a pie crust on bottom, filling in the middle (apple pie filling in this case) and a pie crust on top. An apple crisp usually doesn’t have anything on the bottom. Its often made in a 9×13 baking dish and it has the filling and the a crisp topping on top.

An apple crisp pie is the best of both worlds! It has a pie crust on the bottom/sides, then apple pie filling, and is topped with a delicious, crisp topping. Some crisp toppings include nuts or oatmeal, this one is super simple with just flour, sugar, butter, and spices.

How do you Keep an Apple Crisp Pie From Getting Soggy?

To keep your apple crisp pie from getting soggy, be sure to let it cool completely before cutting into it! I know it can be tempting to dig in when its hot, but if you cut in too early, the filling may not be set.

If you like your apple pie crisp to be warm, let it cool completely, and then warm it back up in the microwave before serving.

What Are The Best Apples For Apple Crisp?

I love to use a variety of apples for this apple pie crisp. You really can’t go wrong with anything! My favorite apples for crisps and pies included Gala, Fuji, and Pink Lady. They’re all sweet and crisp.

Don’t get too caught up in the type of apples you use, just go for a variety of kinds!

Can I Leave an Apple Crisp Pie Out Overnight

Its best to not leave your apple pie crisp out over night but to wrap it up tightly and store it in the refrigerator. When you’re ready to eat it again, warm it up in the microwave and serve it with a scoop of vanilla ice cream!

I have definitely left my apple crisp out over night on accident, and all was well in the morning when I had a slice for breakfast 😉

For the Pie Crust

For the Crisp Topping

Preheat your oven to 400 degrees.

To your quarter cup of flour/salt mixture that you set aside, add 1/4 cup of cold water and whisk. Pour this mixture into your larger flour and shortening mixture. Use a fork to incorporate it as best you can into a ball. Then use your hands to squish it more into a ball. It will be very crumbly but this is good!

Gather it into a rough ball, sprinkle some flour on top, and then roll out with a rolling pin. Try hard not to overwork your dough. Even if it falls apart a bit, just piece it together and roll it as best you can until its 1/4″ thick. Lay your crust gently in a pie dish and cut off any excess. (We love to bake the excess at 400 degrees with a sprinkling of sugar on top for 10-12 minutes, or until golden brown. Eat it like cookies!)

Now its time to make your filling! Combine all of the dry ingredients, then add the apples. To save time on peeling, coring, and slicing your apples, get yourself one of THESE. Total game changer. Once your filling is all mixed together, add it to your pie crust. Dot the top with pieces of butter (2 tbsp).

Grab a bowl and start making your crumble topping! Now combine all of the dry ingredients, then add the butter in small chunks. Use a pastry cutter. I like to use my hands after a while and squish it all together! Sprinkle your crumble over top of the filling. Its okay if your filling is very high! It will bake down and lower.

Once you’ve added the crumble mixture to the top, place your apple crisp pie in the oven and bake at 400 degrees for 10 minutes, then lower the temperature and bake at 350 degrees for 40-45 minutes. Its down when the crumble on the top is golden brown and the apples are cooked through. Sneak an apple out to test it!

Let your apple crisp pie cool completely before cutting into it, so the juices can set. When you’re ready to serve you can warm up each slice. Serve it will a dollop of homemade ice cream or whipped cream. Enjoy!

Let me know if you love it in the comments below! And if you do, be sure to save the recipe on Pinterest so others can find it as well.

Pin it for Later! 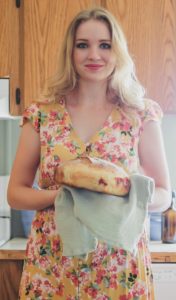 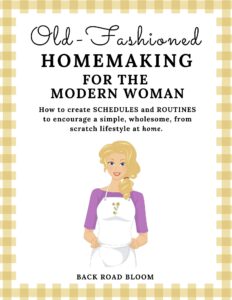 This website uses cookies to improve your experience while you navigate through the website. Out of these cookies, the cookies that are categorized as necessary are stored on your browser as they are essential for the working of basic functionalities of the website. We also use third-party cookies that help us analyze and understand how you use this website. These cookies will be stored in your browser only with your consent. You also have the option to opt-out of these cookies. But opting out of some of these cookies may have an effect on your browsing experience.
Necessary Always Enabled
Necessary cookies are absolutely essential for the website to function properly. This category only includes cookies that ensures basic functionalities and security features of the website. These cookies do not store any personal information.
Non-necessary
Any cookies that may not be particularly necessary for the website to function and is used specifically to collect user personal data via analytics, ads, other embedded contents are termed as non-necessary cookies. It is mandatory to procure user consent prior to running these cookies on your website.
SAVE & ACCEPT
36 shares